About Apologetics in Manchester

Apologetics in Manchester was established in late 2009 by a group of people from the Manchester area with a passion for Christian apologetics.

Our aim is to assist in equipping Christians with the confidence, material and methods needed to share the good news of Christ's resurrection with family, friends and colleagues. 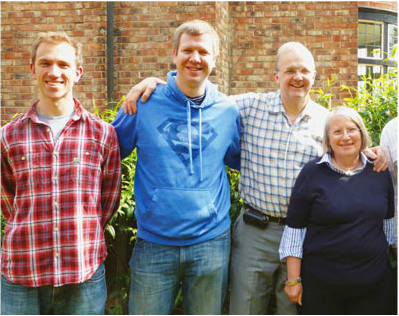 Philip and Brenda Lewis:
Brenda and Philip Lewis first became interested in apologetics through RZIM training weekends, and then completed a Diploma in Biblical and Theological Studies with an apologetics bias at Wycliffe Hall, Oxford in 2008.  They have 8 grown up children and 14 grandchildren.

Philip became a Christian at 11. He believes his apologetics training has equipped him with renewed zeal and understanding to share his faith with thinking sceptics and those with other faiths, and to encourage and equip others to do the same.  He works as a cardiologist in both the private and NHS sectors, where he is an enthusiastic medical educator, and with his team won the national “Hospital Doctor Cardiovascular Team of the Year” award in 2005. He is also active in clinical research.

Brenda became a Christian in her late teens, after struggling with her parents’ faith which seemed to her then to have no scientific basis.  She therefore feels strongly that young Christians need to understand that their faith is reasonable and robust.  She is the Headteacher of The King of Kings School, an independent Christian school in Manchester, and is heavily involved in the management and development of an international Christian qualification, the ICCE.


Josh Thorp:
Dr. Josh Thorp is currently working as a hospital doctor, having studied medicine at The University of Manchester. During medical school he took a year's break from medicine to study at The Oxford Centre for Christian Apologetics, where his confidence in the truth of Christianity grew alongside his desire to see to it explained to ordinary people.


Jon King:
Jon King became a Christian in 2003 after finding himself increasingly troubled by what he saw as significant difficulties with an atheist worldview, and after coming to recognise that he could no longer ignore the evidence for the life and resurrection of Christ. He is passionate about the importance of engaging with people’s intellectual objections to faith, and spent two months studying in Oxford at the Oxford Centre for Christian Apologetics in 2009.

Having worked for 4 years as an in house lawyer for Goldman Sachs in London, he moved to Manchester in September 2009 to start work as a barrister on the Northern Circuit. He is a member of Holy Trinity Platt, Rusholme, and lives in Stockport with his wife, Lois.

AiM was founded in 2009 by 5 co-founders: Philip and Brenda Lewis, Josh Thorp, Jon King, and John and Lydia Allister. Although John and Lydia have since relocated to Nottingham, where John is vicar of  St Jude's Church, Mapperley, we are very grateful to John and Lydia for the effort and inspiration they contributed to launching and running AiM.